Problem A
Lost is Close to Lose 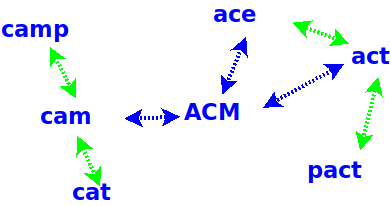 Better Documents Inc. is contemplating the next generation of word processors. Now, nearly every word processor includes a Spell Checker. BDI, however, is looking forward to replacing that with a true Typo Checker. We’ve all been caught, after relying on a spell checker, by typing mistakes (“typos”) that just happen to wind up as a correctly spelled word, just not the word we intended. BDI hopes to use AI to determine when a word’s context suggests that it is out of place and probably should have been a different, but similarly spelled, word.

As a first step in this process, they want to see how common such similar words really are in ordinary text. Write a program to read in paragraphs of text and to produce a list of similarly spelled words occurring in that text.

Two words are considered to be similarly spelled if the core of one word can be converted to the core of the other word by a single application of any one of the following transformations:

Each line of text will contain $0$ to $80$ ASCII characters (not counting line terminators).

For each word core in the text that has one or more similarly spelled words, print a line consisting of

The lines printed should be in alphabetic order of the word cores to the left of the colon.

If there are no similarly spelled words in the input, print a single line containing the string “***”.